“Johann Alois Senefelder (6 November 1771 – 26 February 1834) was a German actor and playwright who invented the printing technique of lithography in 1796.” (wikipedia)

Why am I writing about him? Because I’m taking a class at Sacramento City College on Lithography and our first assignment is to write a short paper about this guy. So lets get to it!

Alois was born in Prague, he had 8 siblings whom he had to care for when his father, a successful actor in the court of Munich, passed away in 1791. To do this Alois had to drop out of Law school (but he didn’t want to go anyway). Although he had minor success with his first play, when his father died, times were tough. Alois couldn’t scrounge up enough money to print his plays so he tried to find a less expensive method of printing his work.

[I] could not withstand the desire to own a small printing establishment myself. “Thus,” thought I, “I can print my productions myself, and so alternate healthfully between mental and physical activities.” I could earn a decent living, too, and thus become an independent man.
-The Invention of Lithography by Alois Senefelder

There were only 2 methods for printing back in 1795.

Relief printing where the image protrudes from a plate, ink is applied, and you stamp or press the image onto paper. Like this linoleum block stamp of a lego minifig that I made.  Common examples of relief printing are rubber stamps, typesetting, and woodcuts. DIY relief prints can be made with corks, rope clues to cardboard, foam shapes, fruit, leaves, really anything with a texture.

Intaglio printing where an image is cut into a plate, the entire surface is covered with ink, then you wipe off the ink so that ink only remains in the depressions. When you press the plate to paper the ink comes over. I’ve seen some really cool prints made from simple styrofoam trays. This image is from a tutorial.

Early artistic intaglio prints were made by artists like Albrecht Dürer by scraping lines into metal, like sketching, where ink could hold then be transferred onto paper. These allowed for more detail than woodcuts as seen in Dürer’s largest etching,the image below, The Cannon,  1518. 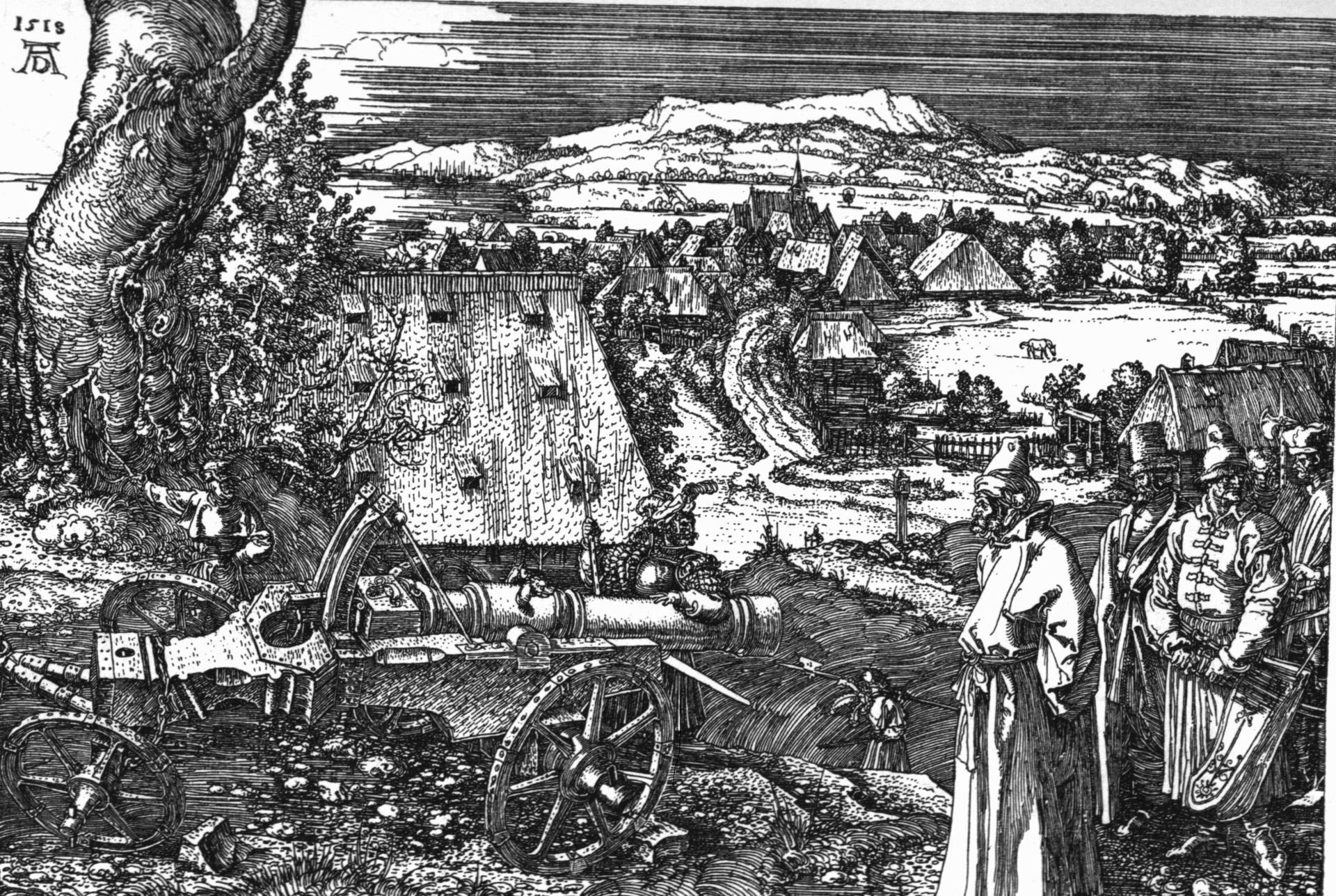 “I had just ground a stone plate smooth in order to treat it with etching fluid and to pursue on it my practice in reverse writing, when my mother asked me to write a laundry list for her. The laundress was waiting, but we could find no paper. My own supply had been used up by pulling proofs. Even the writing-ink was dried up. Without bothering to look for writing materials, I wrote the list hastily on the clean stone, with my prepared stone ink of wax, soap, and lampblack, intending to copy it as soon as paper was supplied.

As I was preparing afterward to wash the writing from the stone, I became curious to see what would happen with writing made thus of prepared ink, if the stone were now etched with aqua fortis. I thought that possibly the letters would be left in relief and admit of being inked and printed like book-types or wood-cuts.

Then I examined the result and found the writing about one tenth of a line or the thickness of a playing-card in relief.” (The Invention of Lithography by Alois Senefelder)

How is Lithography Different?

Lithography originally used an image drawn with oil, fat, or wax onto the surface of a smooth, level lithographic limestone plate. The stone was treated with a mixture of acid and gum arabic, etching the portions of the stone which were not protected by the grease-based image. When the stone was subsequently moistened, these etched areas retained water; an oil-based ink could then be applied and would be repelled by the water, sticking only to the original drawing. The ink would finally be transferred to a blank paper sheet, producing a printed page. This traditional technique is still used in some fine art printmaking applications. (wikipedia)

A Long Road to Success

Once Alois improved his process he approached an old friend who was a musician, showed off a well made print and they partnered to get Alois started. They made a good profit off of the musician’s compositions and Alois was on his way to a viable business. Many trials ensued. Although he got the process right, he had trouble scaling it up and printing large editions. There were numerous problems with the presses, lots of wasted paper, and angry clients.

He worked diligently to invent inks, tools, presses, and processes that were effective in creating beautiful prints. Then his mom made him share his success with his brothers. His brothers were not very good at replicating the process and soiled Alois’s name in the region. Eventually Alois went to London and got a patent for his invention. As the group attempted to franchise the process throughout Europe there were a few lawsuits and disagreements between those in Alois’ family and the various partners who had become involved along the way.

Alois taught many others to become stone-printers and stone-artists. He experimented often to print not only sheet music but maps and art. He eventually got a number of royal commissions, married the daughter of the Royal Chief Auditor Versch in January, 1810.

His greatest achievement was to extrapolate his process to work with metal plates so that   print shops were not burdened by the use of the heavy stones. This made printing much more affordable and enabled the spread of the printed word.

In his words, “The material advantages of it are as follows:

He goes on in his book to detail all of the printing processes that he invented saying, “I desire that soon it shall be spread over the whole world, bringing much good to humanity through many excellent productions, and that it may work toward man’s greater culture, but never be misused for evil purposes.”